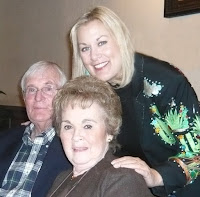 This picture was taken in Palm Springs during the film festival, it's me with John Dixon and his wife, Lee. We had such a good time together! Today I'm working on answering emails and invitations to bring the film to India, Paris, Munich, Tokyo, as well as many venues in the U.S. I wanted to write a post to tell everyone what this feels like for me. Bringing Maynard Dixon's story to so many interested audiences is really such a dream come true, and it just keeps getting better.

When I think of all of the doors that have opened for me since I began the film, I am really humbled. And all of the great people that I've met, and the places that I've traveled! I never imagined that I would still be doing this so many years later, but I'm still loving it and still learning. Making a film is a very complex undertaking, and since this was my first, I consider this Filmmaking 101. I made many mistakes, but worked with many generous people who took the time to show me the ropes and forgive me my inexperience.

My passion for Maynard Dixon's art is what kept me going, and still does. Whenever I speak at screenings of the film, I'm so happy to hear how enthusiastic people are about Dixon's art, especially those who weren't familiar with his work prior to seeing the film. I recently received a wonderful email from a guy who has always wanted to make a film, and he said that hearing my story gave him the courage to go for it. I made sure that he understood that I was supported by incredible people who believed in my dream as much as I did, and that I couldn't have finished without them..but what I believe is that if you are fully invested in something that you believe in, people show up. Teachers and fans and scholars appeared in my life to help me to accomplish this task. I ran into John McEuen at a Gram Parson's documentary premiere, and later he offered to compose the music for my film. Diane Keaton invited me to lunch at the Polo Lounge to learn more about what I was producing about her favorite artist. I asked her if she would narrate the film and she vehemently refused- but agreed to record it years later, thankfully! Editor Elen Carysfort bought an Avid system and created an editing studio so that we could work on my film together. How incredible is that?

I'd better get back to answering emails and planning the rest of this year. I'm really looking forward to the travel! I have two films that I am interested in producing, and will keep you all posted as they develop. At the risk of sounding corny, I want to close this by encouraging everyone to believe in their fondest dreams. I think that our beliefs about what's possible for us determine what we manage to achieve, so shouldn't we dream big? Who would have believed that I'd be showing Dixon at the Smithsonian and in Mumbai, India?
Posted by Jayne McKay at 10:22 AM No comments: