There will be a screening of the film this Saturday, August 1st at 1:30pm at the Bowers Museum in Santa Ana. There are many fascinating exhibits at the museum, including Rembrandt etchings and some remarkable African photographs. I will be speaking after the film and look forward to a great audience.
http://www.bowers.org/index.jsp
Posted by Jayne McKay at 12:16 PM No comments: 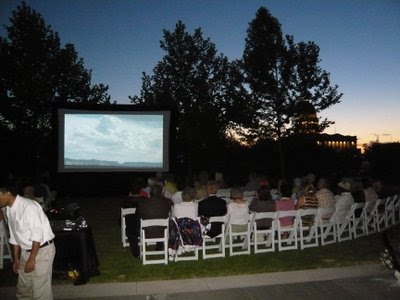 It's been a busy summer, after an idyllic vacation in the Pacific Northwest, I flew to Salt Lake City for the first outdoor screening of Maynard Dixon Art and Spirit. The event was hosted by Williams Fine Art, The Salt Lake City Film Center and the UMFA Friends of Utah and Western Art, and Sam and Diane Stewart generously opened their home and glorious gardens for the many guests. That's the State Capitol building just beyond the screen, and when the sky grew dark, the lights from the dome we just breathtaking! 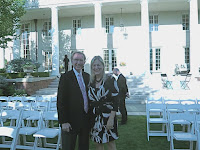 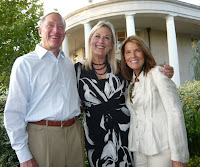 (l) me with Sam and Diane Stewart
(r) me with Clayton Williams, my friend and owner of Williams Fine Art.

This was the first time that the film had been shown outdoors, and I want to thank all the wizards who mastered the technical requirements, they did such a brilliant job. The film looked incredible projected on an inflatable wide screen. It was a beautiful, warm July night, with just enough breeze to keep everyone comfortable. And the sound was perfect! As always, I enjoyed meeting so many Dixon enthusiasts and met some people who attended not knowing very much about Maynard Dixon and his remarkable art. Everyone was enthusiastic and happy to be able to see some of the paintings from the film in the Stewart's impressive collection of art.

There were so many great people that I met during the evening! I was happy to meet Hal Cannon, the founder of the Cowboy Poetry Festival in Elko, Nevada. Now there's a documentary that I'd love to produce! It was also a pleasure to finally meet Geralyn Dreyfous, the director of the Salt Lake City Film Center. She is an award-winning
producer and a dynamic force in the Salt Lake City film scene. I'm very grateful for her efforts to bring this event together with the help of Diane Stewart, Clayton Williams and Donna Poulton. (right, me with Diane Stewart and Geralyn Dreyfous)


The following day, I was enjoying champagne on the patio at Sundance with my friend, Donna Poulton, who is Associate Curator of Utah and Western Art at the University of Utah's Museum of Fine Art. Donna recently co-authored the book, Painter's of Utah's Canyon's and Deserts. Thank you, Donna, for my first visit to Sundance when it wasn't covered with snow. It was just a heavenly day~ 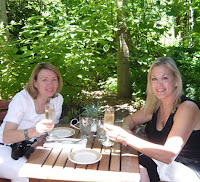 This has been a very memorable summer so far, next stop, the Bower's Museum in Orange County on August 1st. The fall schedule is filling up quickly, so stay tuned.
Posted by Jayne McKay at 5:35 PM No comments:

A Heart full of thanks to my dear Pally, Daniel Dixon

By now, many have learned about the recent passing of Daniel Dixon.

He was a wonderful steward of his parent's legacy, though he often compained that being the "Child of Giants" was a curse. He felt that he lived in the shadow of the greatness of Maynard Dixon and Dorothea Lange, but Daniel possessed many of his own talents, having experienced a brilliant career as an advertising executive, political speechwriter and author. He remembered his parents well, and shared many hours with me, which I found very difficult to edit when I was assembling the film. So many stories, vividly recalled and passionately shared by a man who physically resembled his father and aesthetically mirrored his Mother at times. Daniel was complex. Ask anyone.

His quick wit, his rambunctuous laughter and his frequently eloquent turn of a phrase will remain with me for the rest of my life. On occasion, Daniel could be stern with me. He liked to give advice, and was quick to reprimand. He convinced me that my film would benefit from his co-authoring the script, and the truth is, he knew I might have never finished my task if someone didn't insist on setting a deadline! He did that for me, and our script won the Spur Award last year, the oldest literary prize in America. Daniel was very proud of that award, and today, I can't help but smile, remembering how he drove to my home to convince me that we needed to work together on the script.

I feel fortunate to have known him well and I will miss our frequent phone conversations, which often included an unexpected ukelele performance, or a story from long ago, maybe the one about Perry Dilly, the quadrapalegic puppeteer who lived downstairs from his father's studio...I have many of his stories recorded, songs, too, and I'd certainly like to share them with everyone, maybe I'll find a way. Daniel would like that. 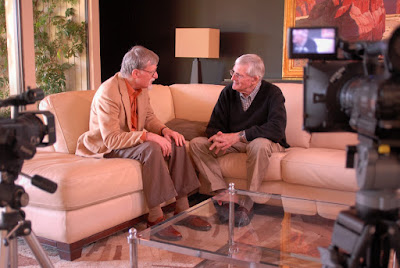 OLDER AND WISER
By Daniel Dixon (written in 2005)

Back when I was a mere 60 or so, I never even glanced at the obituaries. But now my reading habits have changed. Before I so much as peek at the headlines of the Sports section, I check out the obits.
My interest is in the names, not in the embalmed descriptions of the departed. Most of these notices are crafted by cub reporters or by undertakers, who prepare their text as they might ready a corpse for interment. The results are stiff, cold and without the faintest hint of a heartbeat. In other words – dead meat.
If composed by those same novices and funeral directors, I’m afraid my own obituary would sound just as lifeless.

First: Age, occupation, time and cause of death, date and place of birth.

Third: Professional History. Author of many magazine articles, newspaper columns, a television documentary, and a memoir of his father. Also an advertising executive for several leading national and international agencies. Creator of over 2000 radio and television commercials and the winner of numerous industry awards. Additionally, a political consultant who helped shape campaigns for the House of Representatives, the U.S. Senate, mayor of New York and Chicago, and President of the United States.

Fourth: Hobbies and Interests. Relished the popular music of the 20's and 30's. Greatly enjoyed cooking.

Finally: “It was the wish of the deceased that no memorial services be held.”
“The deceased.” What does any such language, reeking with formaldehyde, tell you about who and what I am – my passions, my prejudices, my quirks, my strengths, my weaknesses? Nothing – not a syllable.

So let’s take a peek at the late Daniel Dixon as suggested in a very different kind of obituary. Only in one respect does it resemble the first. Aside from the imagined date and cause of death, every word of it is true.
Daniel Dixon went to sleep last Sunday and never woke up. It was one of the few peaceful events of his restless life, which lasted 81 years.

Even his mother, the distinguished photographer Dorothea Lange, described her son as “irregular.” He was an incorrigible truant who dropped out of school in the tenth grade to become a wandering delinquent. For several years he ate out of dumpsters and slept in doorways. Once he stole and pawned his mother’s cameras. When he was drafted into the Army just after World War II, he refused to take the oath of allegiance until promised that he woudn’t have to take basic training. Even then, the military coudn't’t keep him in line or on the reservation. Nine of his twelve months in uniform were spent in the stockade. He rose to the rank of private before the Army finally capitulated, allowing him to escape with an honorable discharge.

Mr. Dixon then returned to the streets. Most of his days were spent in public libraries, where he was able to keep warm. He also did a lot of reading, which gave him the implausible notion that he might become a writer. So indeed he did, but not because he especially enjoyed it. He wrote for money, not for pleasure. Of all the material he wrote, a few love letters may be longer remembered that anything he ever published. Perhaps the highlight of his career as a journalist had nothing to do with the byline. He was probably the only man ever to be offered and to turn down the job of picture editor for Playboy Magazine.

Mr. Dixon was guided by several favorite maxims. “Chaste makes waste,” he often declared. He habitually arrived for appointments precisely on time. “Punctuality,” he insisted, “is the courtesy of kings.” But the credo he most often cited expressed his feeling about the splendors and satisfactions contained in a bottle of wine. “The red will never hurt you,” he declared, pouring his guests yet another glass.

Mr. Dixon was an enthusiastic cook. “Beats writing,” he said. “Nobody dares tell you when it’s lousy. He also rejoiced in the company of his ukulele, which he believed had a mind and heart of its own. He was certain that his old comrade would miss him when he was gone, just as he was sure that all computers hated his guts.

Mr. Dixon is survived by a family of certified eccentrics and (at last count) as many friends as enemies. He is only temporarily separated from his wife Dixie, who remains his greatest joy and comfort in or out of this world. Mr. Dixon didn’t know whether or not he believed in God, but he did believe that this marriage would last forever, even after death.

From somewhere out yonder, Mr. Dixon says “Hello!” Nobody there ever says “Goodbye.”
The writing of this autobiobit has been a very instructive experience. Obviously, it’s just a rough first draft. It’s too extreme. It lacks balance. It probably should contain more routine information than it does.

But at least it has a little life. I think that’s important. In or out of the obituaries, I’m not ready to be treated as dead meat.

How about you?
Posted by Jayne McKay at 1:02 AM No comments: